This weekend so far has been a weekend of eating out and not cooking in. Last night Andrew and I went out to Pho Little Saigon, a place on the corner of Homestead and Wolfe (about five minutes driving distance from our house). We had been there before and I had been impressed by their pho, shrimp spring rolls, and avocado smoothie. Last night was a little lackluster for me. Let me explain a little more.

The first couple times that I had pho from anywhere I was unimpressed. I’m not a huge fan of rice noodles and I always found it a little bland. A couple weeks ago I was up for trying it again when I was feeling a little under the weather. We went to the closest place to our house: Pho Little Saigon across the street from 99 Ranch Market. I got the pho with rare beef and lean brisket. I also ordered an avocado smoothie and shrimp spring rolls. The pho really hit the spot, it was savory and spicy, the noodles tender but not mushy. The beef was tender and correctly cooked. The smoothie was creamy, cold, and sweet. The spring rolls were full of shrimp and the peanut sauce that came with them was great. The service was efficient and the food came out super quick. This meal made me change my opinion of pho.

Last night I was craving pho again. I wanted to enjoy that savory hot beef broth laced with lemon, mint, and fish sauce. I wanted tender beef, slippery rice noodles. Instead, I got a clump of sticky rice noodles, bland broth, and the beef balls. Oh, the beef balls. They were like meat balls, but the texture looked like hot dogs and felt like squeaky rubber in my mouth. I had been looking forward to something totally different.

I still ate most of it. It was passing and edible. I would just never get beef balls again.

What came out was something that was wrapped in layers of flaky, grease soaked pastry. It was like they had not bothered to drain the damn thing. The inside was pretty tasty: creamy, but also chunky and peppery mashed shrimp. It came with a sweet, slightly vinegar sauce that cut through some of the grease. I ate about half of it and couldn’t eat anymore. It just was too greasy.

Last night my friend Melissa came over for dinner. Thankfully, she doesn’t have any dietary restrictions so I was able to make shrimp and noodles. 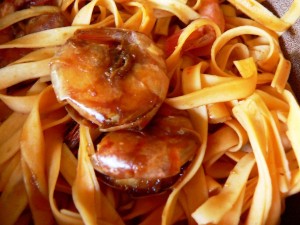 When I was at whole foods I bought five pounds of frozen shrimp in the shells, a noodle kit, clover sprouts, honey mustard yogurt dressing, and avocados. I defrosted a few handfuls of shrimp in the sink. I put them in a collander and ran cold water over the shrimp for about five minutes. I put water on to boil for the noodles. I sauteed the shrimp in a little bit of olive oil. Once one side of the shrimp turned pink I flipped them over. I put the dried noodles in a bowl and then poured the boiling water over it. I left the noodles in the hot water for five minutes. I added the sauce packet to the shrimp and stirred in a couple tablespoons of water. It turned out spicy and tasty. Melissa and I both agreed that there could have been more sauce since it turned out a little dry with th noodles. I also made a green leaf salad by placing green lettuce leaves around a bowl the piled clover sprouts, chopped mint, and half of an avocado in the middle.

While this is not something I cooked it definitely looks and tastes delicious. My boyfriend and I went to Stagnaro’s Seafood Grill last night on the wharf. They specialize in Italian seafood dishes. I got the seafood lasagne.

It had spinach, shrimp, and white fish with a red sauce and an alfredo sauce. I don’t like cooked greens, so the spinach was a little hard for me to eat, but I managed.